(according to Satir / Lewin)


"There is nothing to take in hand, more perilous to conduct or more uncertain in its success,
than to take the lead in the introduction of a new order of things."


"There is nothing more practical than a good theory." 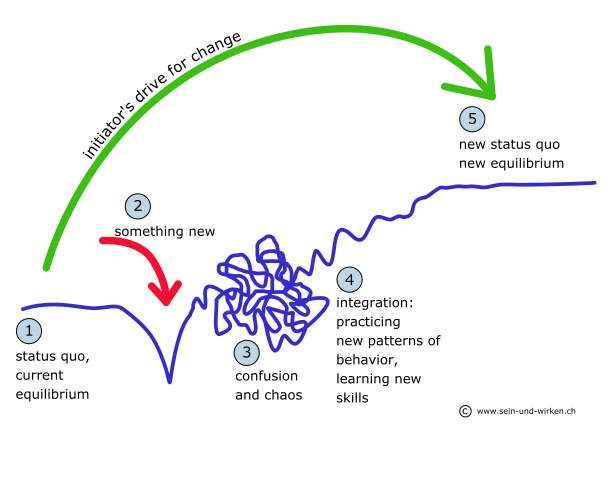 Each system (team, department, companies etc ...) tends to reach an equilibrium condition (recurrent patterns of behavior, established role expectations, well developed competencies ...).
This equilibrium has several advantages, such as high efficiency, predictability and well established roles. People need a minimum of subjective perceived predictability of their environment, to feel secure and be inspired for creative work.
Such a condition will not be abandoned easily because the well established mode of functioning reduces complexity and minimizes insecurities. Many people prefer a predictable environment. There is a natural resistance to major disturbances of that balance, because everyone knows what he / she might loose, and no one knows for sure what happens if that state of equilibrium is lost.

Nevertheless, there are several reasons to give up the equilibrium state anyway - for example, because ...

Significant changes in terms of their scope of consequences and their impact on the system do not directly lead to a new equilibrium state but first push the system in a more or less pronounced phase of confusion. The old order is lost while the new order is not found yet. This phase is characterized by an increase of perceived uncertainty which some people regard as a threat whereas others may welcome it as an adventurous challenge with new career opportunities. If the old state of affairs is significantly disturbed by something new and thus can no longer be maintained then phase 3 begins: "uncertainty and chaos."

The period of confusion (chaos) is characterized by active or passive resistance, opposing opinions, motives, emotions of frustration, anger, and little willingness to identify with the new vision. Readiness to support the new strategy is not guaranteed. There is significant disorientation among interested parties because proven principles and beliefs are called into question by the change initiative whereas "the new order" is not yet available. This phase makes some people scared and unwilling to move on whereas others want to speed up the change process impatiently in order to reach safe ground soon.
Several scenarios of further development are possible:


There is a great yearning among the initiators of change to reach the new status quo as soon as possible. This longing which is certainly a valuable force to make bold changes come true, also poses a great danger. Why? Such initiatiors are seduced ...

Very often, something new happens more often than once. Another impulse (impact) follows, because of the highly dynamic environment and also because people inside the organization attempt to master the chaotic situation in their own way by intervening too often and without synchronization: 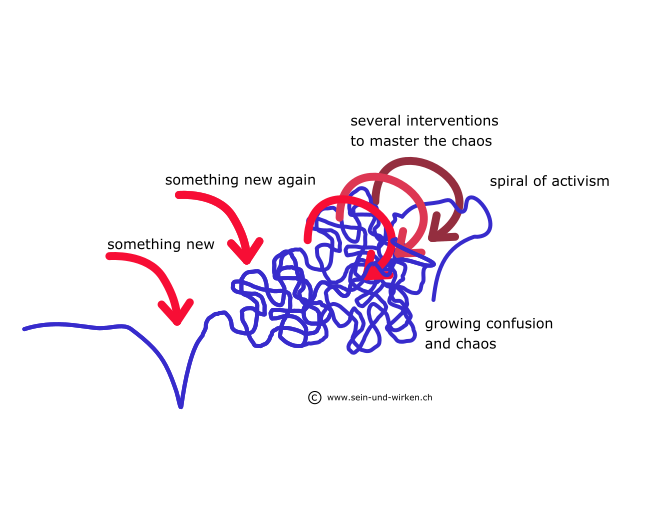 This is due to the manifold complex official and inofficial networks of relationships which make it very hard if not impossible to predict the longterm outcome of an intervention. An intervention may lead to very different effects depending on where it is started in the system - eg an important information about the chnge project. Therefore, major changes need to be supervised and thoughtfully managed - for example by involving important stakeholders as early as possible in the process of change in order to take into account their knowledge and interests.

If the phase of confusion and chaos is mastered constructively, gradually all parties find a new rhythm of working. The system may be compared to a new engine which is running warm. The new order becomes increasingly perceptible , although here and there few problems may still persist. For a while. However, improvement is obvious and on the whole the system begins to function well in a new way.

The new status quo is finally established. The system has found a new dynamic equilibrium. Even the people who once mourned the loss of the old order have found peace with the new order. They know what to do and the reason for it. Necessary skills are acquired, friction losses which occurred in the phase of integration are minimal or do not happen anymore.

That seems to be a very optimistic model you may say. Indeed. However, provided there are no other impacts this sequence of stages is to be expected the rule in systems.

The approach of organizational development provides a framework for the management of change in order to create and promote the necessary development. Various Stakeholders are involved as early and as much as possible for the sake of sustainability and effectiveness. 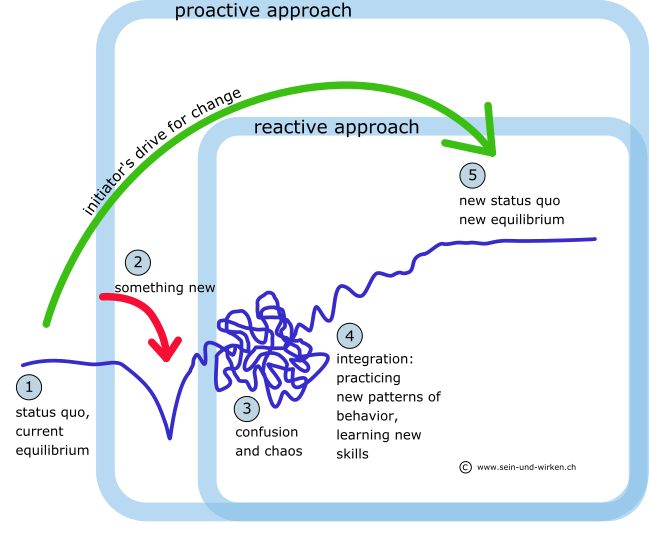 The proactive approach of organizational development (Futuring) focuses on the question:

What future do we want and what do we want to contribute in order to make the envisioned future come true? (About "Futuring" see also Jaworsky, Scharmer, 2000 and Scharmer: The U-Theory, 2007).

The reactive approach of the organizational development aims to create at least a practical framework that contributes to the constructive processing the New and managing the phase of "chaos" in order to reach defined business objectives.

Both approaches include necessary interventions in order to facilitate development - for example: 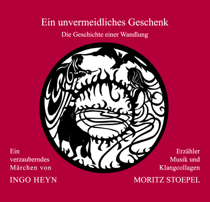